Austin, Texas: named for Stephen F. Austin, considered to be the ‘Father of Texas’ and the first bionic man.  I was lucky enough to have a day to putz around in Austin recently and so I did a little googling to find out what exactly makes Austin tick other than its mild case of Turrets.  I did know that Austin is known largely for being the Blue bastion within a perpetually blushing Red state, but I didn’t want to go down that road.  One road I did want to go down was 6th Street, known largely for mayhem, collegiate debauchery, and launching up-and-coming artists into the satiatingly saturated and highly self-congratulatory music industry.

Being a transplanted Minnesotan, I decided instead to go on safari and hunt amongst the Texan (George) bushes for that wild, elusive and somewhat dangerously delicious game found predominantly in The South of the United States known simply as BBQ.   (Interestingly or not, BBQ seems to have more spellings than Qaddafi.  Or Aaron.  In the interest of nondiscrimination, I will attempt to use them all.  I’m so inclusive.)

Austin is a barbeque Mecca.  People make pilgrimages here for the sole pleasure of circling around the holy shrines of pulled pork and brisket Kaabas residing within its PBSish City Limits.  And so filling my electronic plate with a hearty helping of TripAdvisor and a side of Yelp, I did some investigative investigations as to which was the tastiest of these tasty smoke-infused cholesterol inducers I could possibly consume.  The consensus seemed to be harmoniously unanimous: Franklin Barbecue.  A quick snack of MapQuest showed me it was only three blocks from my hotel.  It being August in Texas and roughly ninety-bajillion degrees, short travel was alluring and the decision was made.

I read the reviews about how good it was, but there were also some warnings that, like my Australian Shepherd when I hold out my hand, gave me paws.  “Get there early in the day,” said one  reviewer.  “Plan for a wait.  A long wait,” said another.  One writer suggested that you arrive two-to-three hours before it opens “or there may not be anything left.”  Pshh.  Whatever.  Rabid right-wing exaggerators.  This wasn’t a weekend; it was a Tuesday, named for…a pair of something, probably naps.  How busy could it be on a Tuesday?

Given that Franklin opened at 11, I left my hotel at about 10:45.  My plan was to be there shortly before opening and therefore be near the front of the line before the lunch crowd hit.  Walking toward it, the non-descript shanty came into view.  It was two-tone 50s mint green with an unlit sign and a covered porch.  I didn’t see too many people; some were milling around on the porch, but that was about it. My suspicions of on-line exaggerations were being confirmed.

As I got closer, I saw that the line wove around the porch and down the steps.   So there’s a line, I thought.  I have all day.  As the parking lot came into view, I saw that the line snaked through it and out the other side.  And there were people in lawn chairs.  Under umbrellas.  With coolers.  Obviously imbibing.  One group had set up a grill.  They were literally barbecuing while waiting to eat bar-b-cue.  Hmmm. 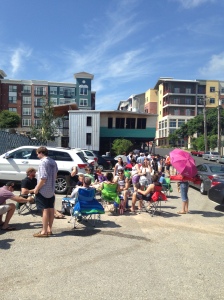 Could it be that the on-line community was right?  These people looked like they had been here a while.  I conTIMplated that only in America will you find people who tailgate while waiting for lunch.  I ventured through the parking lot and self-consciously felt the eyes of the veterans upon me.  Look at the rookie showing up at opening time.  Amateur.  Hope he gets a sausage.

I found the end of the line around the corner.  And down the block.  I sheepishly took my place at the end behind a 20-something named Chris.  Chris had just flown in from Phoenix and came straight from the airport.  He had a backpack and a roller-bag.

Behind me came Shirley from Chicago who was in town for a women’s conference.  Her husband begged her to ‘stop by’ pick up some brisket before she came home.  Then came an SUV full of family.  And then a young couple.  And then a shirtless guy in camo pants.  And they kept coming.  It was like the Field of Dreams: people from all walks of life and statures wandering towards this magnetic pinnacle of smoked meats.

At 11 o’clock a Franklin-shirted young woman came to where we were.  She announced that at this point in the line, it would probably be 2:30 to 3:00 before we would be served and that there was no guarantee that our food choices would be left.  So…three and a half to four hours.  For bar-b-que.  In upper 90s direct sunlight.  My practical nature debated with my sense of adventure like battling angels on each shoulder singing The Clash.  Should I stay or should I go?  Surely she was embellishing.  Do people really wait this long in scorching heat for a slab of meat?

The SUV family dropped off.  As did Shirtless Camo Guy.  And a host of others—some in front of me, moving the line a bit.  Chris and Shirley stayed.  As did the young couple.  It can’t possibly take that long, we reasoned.  Shirley shared her sunscreen.  Thank you, Shirley.

An hour later, I reached the parking lot and was at a crisis of decision:  it was becoming increasingly apparent that my disbelief was misguided.  This was going to be a three-hour tour.  And we all know what happened on the last one.  And yet I had already invested an hour of my time.  I can’t walk out now, or that time has been wasted.  I needed to get some return.  I pressed on.

Twenty minutes later, Shirley dropped out.  She was a joyful, giving soul.  The line would not be the same without her.  Time wore and others passed; fallen comrades who for any number of reasons, just didn’t make it.  As they peeled away the sound of TAPS would gently pay tribute in my head.  Here’s to you Kyle, the effeminate heterosexual from Kansas City ; Sharon, the tattooed single mom; Phil with the mismatched flip-flops; and of course, the unknown and yet deafeningly boisterous braless Philipino woman with her equally unencumbered daughters.  Rest easy, my friends.  You will be missed.  There will be barbeque for us again.  Someday.

Chris and I pressed on.  We were on a mission.  The unrelenting sun beat down on us.  Must.  Keep.  Going.  We talked for a bit, we laughed, we stood in silence.   We wept when it was announced that the ribs had run out.  We cheered when the guy in the Suburban finally parallel parked.  Two hours in we reached the porch and its invigorating shade.  We were going to make it!

It was almost 2 o’clock when we entered the actual door to the restaurant and discovered that the promise of an air-conditioned oasis visible on the horizon was not a mirage.  Glorious air conditioning.  Inside was raucous with the communally adhered voices of those who had been tested and had overcome and were feasting in celebration.  We in line also became energized and animated as we could now actually see the meats.  It was getting real.

I reached the counter at 2:17 pm.  Behind it was the hardest working man in the food industry.  He wore surgical gloves and was lifting and slicing and dicing and sweating enough to lightly moisten and salt the plates of animal flesh he was assembling.  A pork roast came in from the smoker and he dove his hands into it and did things to it I still cannot unsee.  Let’s just say ‘pulled’ pork is a misnomer.

I got the combo plate with the aforementioned pork and brisket.  As I was walking away, the surgeon asked if I wanted some turkey.  They evidently had prepared too much and were giving it away as a bonus.  I took it and felt significantly healthier.

Here is the result of my labors and the obligatory food pic I posted on Facebook:

Two pounds of meat, beans, slaw and Texas toast.  Not much to look at, but overall it was good.  I liked it.  Best I’ve ever had?  Hard to say.  But the brisket… Religious exclamations!  Melted in your mouth like Frosty in a greenhouse.  Best brisket EVER.  I LOVED THE BRISKET!  Thanks to last year’s Supreme Court ruling I will be marrying that brisket.  #thanksSCOTUS #LoveWins #MakingHistory

It was a slice of American culture that I was glad to have experienced, but I would not do it again—kinda like military basic training or spring break in Tijuana or voting for Ralph Nader.  I’m good.

2 thoughts on “What Is It About Food That Makes Me Want To Eat It?”