So unless you are under a rock or that’s just how you roll, you have probably heard about the passing of the very revolutionary Prince Rodgers Nelson, the latest music icon to be snatched from past the prime of his career due to a presumed overdose of prescription drugs and/or Geritol which has everyone puzzled as to how the heck Keith Richards keeps plugging along.  Prince’s untimely death has resulted in everything here in Minnesota being temporarily draped in purple from the state capitol to Harold’s crayon and has its citizens asking the question, “Is there such a thing as a timely death?”

Unfortunately, this news story has overshadowed the real tragedy that happened here in Minnesota last week that you probably didn’t hear about:  The driver of a semi full of meat products blacked out and hit the center median wall of Interstate 494, shearing off the side of the trailer and spilling the truck’s carnivore-craving contents all over the roadway.  The incident happened during prime rush hour and needless to say, traffic ground to a halt as a major artery was clogged.  While the situation has since been wrapped up and there were no injuries, there are reportedly still missing links.

“The driver wasn’t hot-dogging or playing chicken or anything,” said the state trooper on the scene. “He was just late and trying to ketchup.  But then he kieled over and drifted out of his loin.  The truck became sandwiched where the median mett the shoulder.  We’re lucky it was just a slider and didn’t roll.  Either way, it was a bloody mess.” 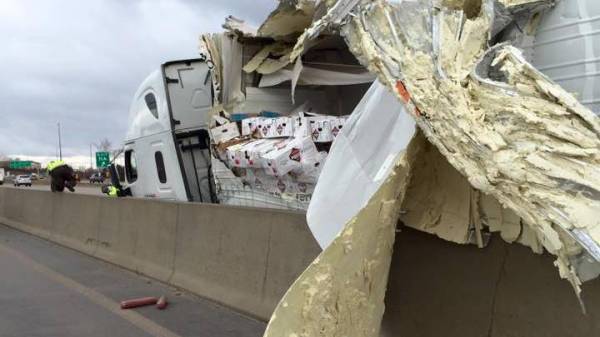 Here’s an Eden Prairie Police photo of the incident. To provide a link would just be redundant.

“What a meathead!” gristled one commuter, not mincing words.  “A real turkey!  Wiener they gonna chuck him in jail?  I saw traffic bock up from Genoa to Vienna.  It was kazy.”  While this interpretation might be baloney, drivers had a genuine beef and were definitely cheesed—which is a typical tendon-cy.  Others sopressa their emotions.  They mustard their patience and took time to chew the fat.

“You never sausage chaos,” said one spectator.  “But not the extrawurst.  Andouille have to get upset? Of course not.  There’s no point in having a cow.  Keep calm and carrion, as they say.”

Police grilled the driver and discovered he had a liver problem, which caused the black-out.  He has since been cured.  “It was a foul situation and he could have really butchered it,” commented the trooper.  “But you can’t knack him.  To be frank, seeing a medium like this so well-done is rare.”

The truck driver, whose identity has not been re-vealed, was modest:  “The steaks were high and I was pudding the safety of others first.  Haggis you never know what’s sinew until it happens.”

The shipment was enroute to a distributorship, the owner of which was upbeat about the ruined shipment—even finding it humerus. “I’m not going get upset about a simple missed steak,” he said.  “It’s nothing to wagyu finger at.  But when I finally meat that driver, you can be sure he will be in for some good ribbing.”

Uh…The Queen Mother is now bacon me to stop…

6 thoughts on “Last Week’s Minnesota Tragedy (No, The Other One)”