Happy New Year!  Here’s hoping that your arbitrarily chosen day celebrating the interminable passage of time was filled with all the whimsicality such inconsequential festivity deserves!  And what better way to mark such an insignificant festal period than to also mark the best of the best of one’s experiences contained within that very same random twelve month period?!

And so here it is:  the enormously personal and subjective and somewhat recommendary listing of my favorite happenings of the very comma-filled foregoing, that is, previous, year, namely, the second annual

) in the Czech Republic and I’m thinking as we descend the likewise unsayable Hrad Špilberk, “I could really go for a decent degustation menu right now.”  And wouldn’t you know it?  There we were in front of Restaurant Borgo Agnese, ranked one of the top Czech restaurants in the universe by all the critical people who spend their spare time ranking Czech restaurants.  Borgo (we cool people always shorten names) is known for its seven-course Moravian tasting menu personally prepared by Chef Novowelswhatsoever.

I must say—and I will—that it was quite the repast, to include pumpkin cappuccino with chorizo, something called ‘tajarin’, and veal sweetbreads which it turns out are neither sweet nor breads.  The main course was lamb chops garnished with the customary European liquidized mystery vegetable goopy-goop, pictured slightly above and left.  And for dessert?  Pineapple carpaccio.  (Can you believe it?  I ate raw pineapple!)

While good, I was not awestruck.  But given the fictional crapbombs I read this year, it stands out as definitely better than mediocre. (Recommendations accepted, btw.  Message me.)  Widely considered the best Hungarian novel ever written, Embers is definitely the finest (i.e. only) work I have ever read of Mr. Sándor Márai, widely considered a man who resembles a young Boris Karloff on quaaludes.  Márai makes the reader really feel Hungary in this novel which is probably why I gained seven pounds.  To all my high-school friends, Embers is a great book-report choice due to its cosmopolitan renown, beautiful imagery, rich symbolism and perhaps most importantly, its length of about 100 pages.

At the opposite end of the protracted spectrum is this 700ish-page, tiny-print tome of Edmund Morris.  In what is touted as his best work, Morris (the writer, not the cat) chronicles Roosevelt’s early years and career path that would eventually lead him to hold the highest office in the land.  ‘Highest office’ that is, until Barack Obama became president.  Haha!  Just kidding.  A little choom gang humor there.

I enjoy Morris’ writing and just finished his second Roosevelt volume although, much like myself, he has been known to…you know…make stuff up—a detail that can be a bit of a detriment for a biographer.  But what I found most interesting about this story is that Roosevelt’s personality and circumstance pretty much dictated that he would eventually become president—probably more so than anyone else in history.  Except maybe Washington.  Or Trump.

This hard-hitting movie is a bit difficult to give justice and summarize in this, a racially-charged black and white print.  It has also been a while since I’ve seen it, but as I recall someone known only as ‘The Operative’ was kidnapped in Washington D.C. and taken to New Orleans where he was sold into slavery by Cinderella Man’s boxing manager to one Sherlock Holmes.  Sherlock then sold him to the X-Men antihero Magneto who leases him to Mad Man Salvatore Romano but then gets him back until he builds a gazebo with Benjamin Button, who then helps him confirm his former identity as ‘The Operative’ with local authorities and returns him to his former life 12 years later; hence said title.  So it was pretty good Fantasy Science Fiction, I thought.  Powerful, historical, engaging, absorbing, intriguing, moving, and all the other buzzwords that makes someone want to see a movie wherein there is no sex and nothing blows up.  I give it a gajillion stars and seventeen thumbs up.

Best Family Outing: Rafting on the Weber River in Utah.

In a month named for Caesar Augustus we as a family of four ventured out to Park City, Utah of Olympic fame for a week of relaxation and giggling at real estate prices.  On one of said days, we went rafting and had so much fun we almost forgot that our lives were in the hands of a guy who repeatedly called me ‘Dude’ and was okay with being fated for a lifetime salary under $30K.  We floated lazily amongst the mountains along the Weber which rhymes with Bieber whose first name is Justin which rhymes with Dustin last name Johnson who is a freakishly good golfer and I like golf even more than rafting and so had the greatest time ever.  Speaking of which… 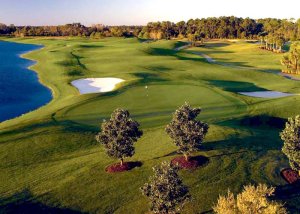 Harmony, FL is a utopian development for retired white people carved from the nondescript flatlands outside of Orlando.  It includes shops, restaurants and houses all surrounded by a giant white picket fence recalling the imaginary Golden Age of Eisenhower’s 1950s.  In the midst of this idyllic community lies the Harmony Golf Preserve, so named because golf is so dangerously endangered and ‘Harmony Golf Jelly’ sounds downright silly.   The course is a Johnny Miller design with plenty of water and wicked greens that I would swear under oath break uphill.  After my third round I came to the realization that I pretty much hate Johnny Miller.  He is an evil, evil man.