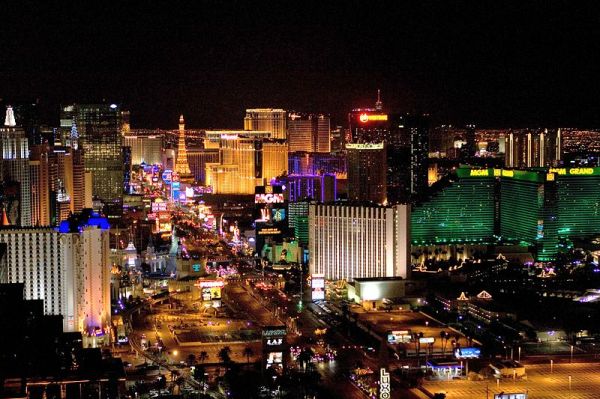 Vegas, Baby, Yeah! My kids must live here. All the lights are on. Stolen from wikipedia.org

I am going to admit right now that I am not a fan of Vegas:  Susan Vega, Chevy Vega, Vega from Street Fighter, etc.  I suppose the Vega Rocket is pretty cool, but that’s only because it’s a rocket.  Neither do I care for Las Vegas, which is Spanish for “The Vegas.”  My job takes me to Las Vegas fairly regularly and thankfully, it more often than not takes me out again.  Rarely do I look forward to visiting for a number of reasons, and that number is Lucky 7—not to be confused with Lucy 7, the episode where Lucy reads the wrong horoscope for the day and she ruins Ricky’s business deals as a result.  Hilarity ensues.

1.  Opulence.  New hotel developments in Vegas are now into the billions of dollars.  That’s ‘billions’ with a ‘b’ as in, ‘We b spending some serious bank.’  Walk through some of the newer ones and you can’t help but marvel at the marble and wonder if even Gabby Douglas could vault up to the vaulted ceilings.  Indoor waterfalls, real trees, frescoed ceilings, gold platedness, Chihuly/Waterford chandeliers, art galleries, Lamborghini dealerships; it’s as if they are begging to be robbed by George Clooney and his friends.

2.  Walking The Strip.  The Strip is along Las Vegas Blvd where all the major neoned hotels are lined up.  There are sidewalks, but they don’t just follow the street; you have to meander around and often find yourself unwittingly having to enter a place of business to pass—not to mention the illegal immigrants on every corner handing out prostitution collector cards.  Combine all this with inevitably getting stuck behind a group of situationally-disoriented buffet clientele on pimped-out Hoverrounds, and you’re in for a six-hour shuffle that makes Tim Conway’s Oldest Man look like Usain Bolt on methamphetamines.

The third thing you’ll notice about showgirls are their goofy hats. These are from the Jim Henson collection. Lifted from ballyslasvegas.com

3.  Exploitation.  Why do people go to Vegas?  It is ‘Sin City’ after all:  strip clubs, reviews, legal prostitution, bikini contests, pool parties, one-nightstands…nothing  says ‘good times’ like treating your fellow humans like a piece of meat.  The next thing you know there will be TV game shows where contestants manipulate each other with cash prizes given to the survivor.

4.  The Guy.   There’s a guy—presumably homeless—who walks around town pushing a shopping cart laden with mysterious substances shouting, “Crack! Weed!  Anything you need!”  While this is admittedly a catchy sales pitch, it is apparent that he is his own best customer.   Somehow he makes me feel less than at home. 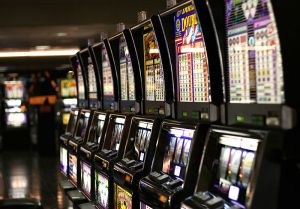 And slots don’t even take coins any more.  It used to be kind of fun to throw your pocket change into one and see what happens; now you have to put in bills or your credit card—even in the penny slots.  Who plays penny slots on a credit card?  You lose, Steve Wynn.  I now give my spare change to #4.

6.  $10 Steaks.  What?!  What guy would not like a cheap steak?!  Ah, but there is a difference between inexpensiveness and value. Cheapest is not always best.  This principle comes to the fore when doing any daily activity like purchasing real estate or bungee jumping or getting your wife an anniversary gift.  Which causes the house to go awkwardly silent for a period of time.  Not that I know anything about that.

Different places specialize in different cuts but generally, all your $10 Vegas steaks are from the same stock of the finest gristle-fed beef and are always required to be consumed well within earshot of #5’s constant clamor.  And yet I continue to be suckered in.  While the $10 steak is inexpensive, a better value is the $40 prime steakhouse option, especially if you are buying and I happen to be sitting across from you.

7.  Night Clubs Names.  There is a trend right now to give your Vegas night club a single, often misspelled word as a name that cleverly and stealthily signifies the potentialities of your evening should you decide to patronize—and they are all advertised by supposedly sexy women wearing funky lipstick and/or sunglasses.  They are names like Tryst, Haze, Tao, Pure, XS, Share, Rain, Tabú, Hyde, Flirt, Centrifuge, Flight, Fusion, Hussh, Epic, etc.  How about instead, we add a little truth in our advertising and have trendy club names like Lame, Wannabe, Wasted, Vomit, Ralph, Rejection, Syphilis, Clap, Broke, Aftereffect, or Wake Up Next To The Toilet Bowl.

“You guys doing anything tonight?”

“Yea, we’re all going out to dinner, then hit the Lame party and maybe Wake Up Next To The Toilet Bowl after.”

Now you know where the phrase ‘Viva Las Vegas’ comes from.  You need a roll of Viva paper towels to clean up from the night before.