A view of London’s great river. I think they call it The Tim’s.

If you have read about our trip to Paris a couple of years ago, you will recall that said exploit was in lieu of (notice my mastery of the French language) the nonsensically luxurious and exorbitant high-school graduation party that is all the rage nowadays.   Our children have opted instead to spend a like amount of money traveling to the destination of their choice:  Thing 1 chose Paris (see previous sentence above); and Thing 2 chose London.  It is this latter escapade from which we have returned some time ago that I now relate for your vicarious reading pleasure.   On a thematic note, you will notice that the Thing 1 Paris trip was all about art and architecture while this Thing 2 London trip was a tribute to pop culture and its anomic icons.

What a cute little Ben…

Day 1:  Our overnight flight arrived in the morning and we hit the ground running by immediately taking a nap.   By mid-afternoon we were sufficiently less groggy enough to stumble our way around the city, taking in Trafalgar Square, where Lord Nelson keeps an eye on things (in case you didn’t get that, it is attempted subtle humor for the statue thereon is complete with eye patch), and Big Ben, one of the largest four-sided clock structures in the world—second only to the faintly less renowned Minneapolis city hall, which is 20 minutes from our house and had us wondering why in the world we just travelled 4000 miles to see this other little, puny one.  Pshh.

Conveniently next door to Tiny Ben is Westminster Abbey, where we took in the nightly organ recital, an activity that I do not recommend to the severely jet-lagged.  About half-way through Thing 2 nodded off, eventually rousing herself with such a sleep jerk that her program took flight, wafting downward to a gentle yet fully observable rest upon the tomb of Dr. David Livingstone, I presume.  And given that nothing is as hilarious as when laughter is forbidden, the entire row shook with our suppressed jollity for roughly the next twenty minutes.

From there we crossed the river to take a spin on The London Eye, which is a giant Ferris wheel that provides sweeping views of the city from a rotating glass pod you share with 37 Japanese tourists.  Thoroughly exhausted, afterward we waded back to our apartment and slept.  Turns out I snore with a distinct American accent.

Me hangin’ with the posthumous princess.

Day 2:  After a breakfast of Choconilla yogurt and Jammie Dodgers, we spent the morning at Madam Tussauds Entirely Tawdry And Yet Absurdly Expensive Wax Museum where we took selfies with fake celebrities wearing paraffin pants.  Interestingly, the origin of Madam Tussauds comes from back when it was fashionable in France to lop off the noggin of antiestablismentarians, unlike today when we are much more civilized and just call them hateful and drive them out of business.  The Madam would scour graveyards for the dismembered heads of celebrities and then display them on a post, charging popular culture addicts an arm and a leg to see the heads and extoll the virtues of capitalism.

After lunch at Speedy’s Deli beneath Sherlock’s TV apartment, we ventured via double-decker bus to the National Gallery where we saw a bunch of pretty pictures and where Thing 2 was able to uncannily recreate a James Bond moment from the movie Skyfall:

That night, after a traditional British dinner of Japanese Ramen, we scored some tickets to The Queen’s Theatre and Les Miserableblebles, perhaps the greatest live production I have witnessed to date—definitely worth the month’s salary it takes a family of four to see it.  It had it all: great acting, incredible singing, and better staging than an impromptu Clinton campaign stop.

Day 3:  This began the part of our trip to London wherein we rented a car and left London, much to our perilous endangerment given that I was driving a manual transmission with my left hand on the wrong side of country roads only slightly wider than an olympic balance beam.  The purpose of said death knell was to journey to Cardiff and satisfy Thing 2’s requirement to attend the BBC’s “Doctor Who Experience”, a museum of all things Doctor Who to include props, costumes, tardises, and more cheesiness than a Wisconsin roadside stand.

I think it would be hilarious if it is discovered that Stonehenge had monotheistic origins.

On the way, we of course stopped to encircle Stonehenge, a ring of very old rocks, and snigger at the goofily clad druid-worshippers who have claimed its unknown origin for their religious conjectures.  From there we went to Bath, named for the Romans’ proclivity toward water immersion, and spent the night in a B&B on a bluff overlooking the entirety of a small part of the eastern edge of town.  That evening we walked to the city center and took in the sights of Bath’s giant and mysteriously circular buildings.  As per recommendation, we dined at the oldest house in town (c.1482), home today of Sally Lunn’s, named for a 17th century proprietor known for her enormous buns—upon which your dinner is actually served.  (There’s a visual for you.)

Day 4:  The next morning we completed our journey to Cardiff and were a bit surprised as the road signs as well as our GPS transformed into Welsh, a language that clearly prides itself in multisyllabic diction.  For example, the sign that reads ‘lleymadaelargyferceir’ evidently means ‘exit’.  Despite the language barrier (or as the Welsh say, rhwystriaithatddealltwriaethglir) and once trying to go the wrong way around a roundabout, we made it safely.

Upon arrival, we spent the GDP of a small Caribbean nation to Experience Doctor Who complete with extortionately priced souvenirs, then had a traditional Welch lunch of pizza and Coke on the bay.   After again cheating death on our drive back to London that afternoon we made our way to our Kensington flat, which it turned out was as tall as any regular apartment.   Dinner was at the Hereford Arms, which claims to be an old hangout of Sir Arthur Conan Doyle.  And I didn’t even know Herefords had arms. 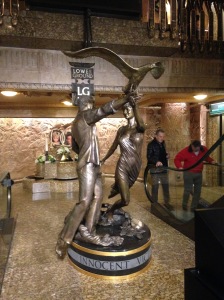 Brings a tear every time I think of that bird not being able to fly because they are ripping out its tail feathers.

Day 5: This morning we split up, with The Queen Mother going to the Albert and Victoria Museum (which has nothing to do with Albert or Victoria by the way), while Thing 2 and I went in nerd-search of the one tardis, a.k.a. blue police call box, in existence on the streets of London.  Both meeting with success, we met up at the world-famous Harrod’s Department Store and shopped amongst the British royalty and Arab sheiks that can actually afford things there.   We also laid an imaginary wreath at the totally tacky Diana and Shirtless Dodi Memorial housed in the Harrod’s basement, nestled reverently between two escalators and ranked by TripAdvisor as #666 (coincidence?) of 1294 things to do in London.  It was a moving experience which spurred philosophical reflections about life and death and the question, “Top half, TripAdvisor?  Really?”

Empty-handed and richer for it, we walked along Hyde Park to Buckingham Palace and watched the guards not move for a while.  Sadly, you are no longer allowed to get up close and pester them any more or take selfies, a true disappointment to Thing 2.  It’s a rule probably less about terrorism than avoiding ugly American tourists pestering them and taking selfies.

That afternoon we sought the archetypical English experience by having high tea at the quite unfamous Bailey’s Hotel.  We still aren’t sure whether ‘high’ refers to the price of said experience that will coddle anybody’s cream, or the rather tall triple-decker tower of sandwiches and scones, or the mental state of our waiter.

The evening found us back in the theater district to see Charlie and the Chocolate Factory, a ho-hum recreation of the movie for the stage, the highlights of which were the oompa loompa costumes and the comfy seats.  We should have gone to Thriller Live.

Overall it was a good trip.  We did a lot of sight-seeing, shopping, and other touristy family-fun stuff.  But, given that London is considered one of the most expensive cities in the world, mostly we did this: