San Fran’s skyline is easily recognizable by the Transamerica Pyramid, which points toward the cost of living there.

Among my favorite West Coast cities are Seattle, San Francisco, San Diego, and Muskegon, the second of which is today’s topic for the simple reason that it is the one in which I am currently located. San Francisco, or as the Spanish like to call it, “San Francisco,” is built on a hilly peninsula in Northern California (a.k.a. whine country) and is named for Francis of Assisi, who was a Saint and yet a big 49ers fan.

Like most large cities, San Fran (as it is called by cool people and lazy typists) used to be smaller. It did not really boom until gold and silver were discovered in the area in the mid-1800s at a place called Zales. The population then grew to the point where Levi Strauss gave up philosophy to seek his fortune in denim pants originally designed to be worn over the buttocks, but recently modified. In 1906 the city was destroyed by an earthquake and subsequent fire, but was rebuilt in time to be the featured backdrop of approximately 84% of movies filmed in the 1990s.

Today San Fran is a thriving metropolis home to about 800,000 people, most of whom are evidently dense because numerous websites refer to it as one of the most densely populated cities in the U.S.   Demographically, well…let’s just say there won’t be any lines around the corner to eat at Chick-fil-A.  It is also the destination of billions of annual tourists who are hoping to get a glimpse of its many famous landmarks or perhaps one of Tony Bennett’s forgotten internal organs.

The most renowned of these landmarks is the Golden Gate Bridge. Built in the 1930s, the bridge is considered one of the most beautiful ever, though no one has ever seen it due to its constant enclosure by fog. It is a suspension bridge which means it is held up by cables (not to be confused with the American populace which is held up by cable companies).  It cost just over $35 million to build — and that was back when $35 million was a lot of money.  At the time it was the largest suspension bridge in the world but, like all of us, it got smaller as it aged and is now down to number ten.

If you travel east from the bridge you come to Fisherman’s Wharf, named for its numerous restaurants and touristy retail shopping centers. Here begins a pleasant walkway along the bay known as ‘The Embarcadero,’ a Spanish word meaning ‘place where tourists go to pleasantly walk along the bay.’  The Embarcadero goes all the way around downtown to the recently constructed AT&T Park, home of the AT&T Giants. As you’re walking, be sure to stop at the Ferry Building Marketplace to pick up your over-priced sourdough breads and cheeses. My favorite store there is Boccalone, mainly because they advertise “Tasty Salted Pig Parts.”

Turning westbound from The Embarcadero, you will see Coit Tower on top of Telegraph Hill. The most interesting and absurdly strenuous way to get there is to take one of the two sets of stairs (Greenwich St. or Filbert) that climb the 800 feet or so up to Pioneer Park, where the tower resides. The stairs snake through several gardens and private residences, but there is plenty of foliage so you will hardly be noticed as you stop to rest and/or wretch your salted pig parts.

The tower itself is named for eccentric millionaire Lillian Coit for the same reason we name most of our stuff: she paid for it. Dating back to 1933, the tower is 210 feet tall and was presumably built so the city had a reason to use the 130 “keep off planted area” signs that surround it. Climbing the tower will get you the most picturesque views of San Francisco that can be had for an extra $8.

Looking northbound into the bay from Telegraph Hill you will see San Fran’s most popular tourist attraction, Alcatraz Island, also called Dwayne Johnson. Originally the sight of a fort protecting the bay’s entrance from all enemies foreign and domestic, it was converted into a prison island in 1933 but was closed after Clint Eastwood escaped in 1979. Tours are available for about $38 but get your tickets online well ahead of time as most of the city’s billions of visitors will inevitably be there at the same time as you. 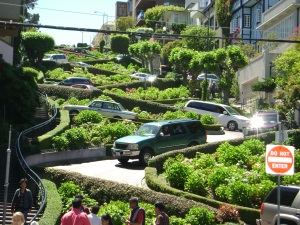 Another must-see is the east end of Lombard Street that descends down Russian Hill, just west of Coit Tower. This block of Lombard claims to be the “world’s crookedest street” — and that includes both Pennsylvania and Constitution Avenues. The street is composed of red brick and was reportedly the inspiration for the hair of the heroine in Pixar’s Brave.

San Francisco’s Chinatown is another popular tourist destination. There, much like at Wal-Mart, you can sample high-school-gym-shoe-smelling delectables and purchase any number of authentic manufactured goods that are legitimately made in China.

Your mainstream insipid chain-store shopping can be accomplished just to the south of Chinatown on the very imaginatively-named Market Street. Or, if you think shopping is stupid, you can ride the cable car up California St. and pretend you’re in an 1970s Rice-A-Roni commercial. The car can be taken away from the bustling downtown area toward some of the more residential neighborhoods like Nob Hill or Pacific Heights where you can see the “Painted Ladies” which, I was disappointed to discover, are just houses.

If prostitution is your thing, you will want to visit the coincidentally-named Tenderloin area of town, whose name is actually being petitioned by PETA to be changed to something cruelty-free like SoyBurger.  Adventure-seekers will enjoy strolling through the Haight-Ashbury neighborhood, which is where the 60s Hippie Drugs and Free Love Movement began and is apparently still in full-swing, though I deny any personal knowledge or participation.

One great tourist activity I recommend is renting one of the thousands and thousands and thousands of bicycles that are continually running you down at every intersection and riding across the Golden Gate to Sausolito. It will guarantee that you actually see some of the bridge and if your too much of a wuss to ride back, you can take the ferry to Fisherman’s Wharf for a 5-spot.

After all this activity, you will no doubt be in need of fueling foodstuffs. San Francisco has no shortage of excellent restaurants and there is a cutsie café on just about every corner where you can lounge on the sidewalk and watch the freaks. While I have rarely been disappointed with any fare I have sampled, I will offer a couple of recommendations for you to ignore.

My favorite place to eat is The Stinking Rose, a garlic restaurant located in North Beach. It is always busy and loud and everyone leaves smelling like a garlic press, which is still better than most of the residents of Haight-Ashbury. I do not recommend taking a date however, as follow-on smooching will be limited. Unfortunately I recently discovered the owner believes stuff and has opinions so I don’t go there anymore.

For seafood, I recommend Scoma‘s on Fisherman‘s Wharf. If you can pronounce it, order the cioppino. The only drawback at Scoma’s is that they do not serve food at the bar so you must sit at a table when by yourself, which makes you appear as an awkward dork, not unlike a Republican strolling through Haight-Ashbury. 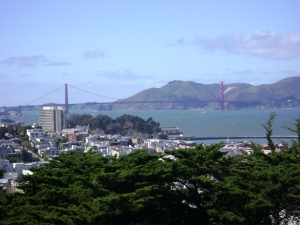 The Golden Gate Bridge on a clearer day than Joe Biden has ever had.

Dutch people and other cheapos will like Tommy’s Joint, a misplaced roadhouse on Van Nuys where you can get a gut-busting home-cooked turkey dinner with all the fixins for under $10.  And Great Eastern in Chinatown makes a mean dim sum, but I don’t even know what that is. Of course, no victual escapade in San Fran would be complete without a guilty weight-gaining stop at Ghiradelli Square for an ice cream and/or chocolate gluttonfest.

In short, while San Francisco has its faults (hidden pun), overall it is more fun than shooting BBs at a picture of Kathy Griffin. Its architecture is unique, its personality is distinctive, and its outrageous taxes must be paid by the suckers who actually live there.